Let’s stop thinking of ‘talented’ as a rigid concept that is inherent (you are born with it), and let’s start thinking about it as something more fluid. Talent can be built on and it isn’t required in order to have fun or do something really well.

When people like my art they often tell me ‘Oh you’re so talented!’. It’s a lovely compliment to receive, but it always makes me feel a bit funny. ‘Talented’ seems such a rigid concept. You can’t become talented, you either are or you aren’t. It also doesn’t take into account the hard work that came before it. It seems the most prevalent attitude is: I am talented therefore I can paint a nice picture, not: I have practiced therefore I can paint a nice picture.

Yes, there are people who pick up a brush for the first time when they’re 20 (or 30 or 40) and create amazing paintings. There are child savants who create art beyond anything I will ever dream of achieving.

That’s not the norm!

If you’re reading this it’s likely you’re more like me: enthusiastic and passionate, but not ridiculously talented in any way. If you think my paintings have anything to do with talent, think again. Instead, it’s hours and hours of practice. It was picking up a brush and creating something that looked crap. It made me never want to paint again, but instead I said ‘never mind’ and kept creating. Until one day (honestly, this day came MUCH MUCH later than I would’ve wanted!) I painted something and thought ‘hey, I actually quite like that!’

The thing that makes me sad though is that often with the compliment from the first paragraph comes a feeling that is left unsaid: ‘you’re talented, but I’m not’. People lament and say they ‘can’t paint faces’. Back to that feeling of you can only do it if you’re already magically good at it; if you’re talented. Want to know a secret? I couldn’t paint faces either! I took some online courses and I practiced, and now I can! 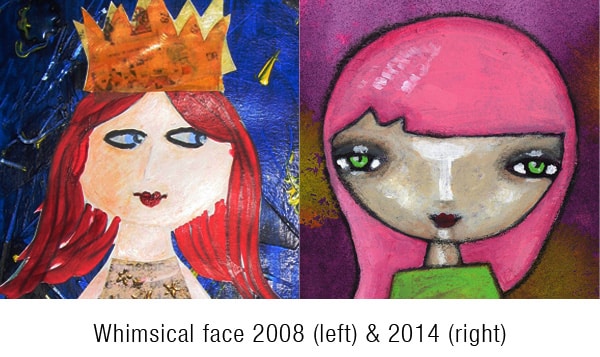 LOOKIE!! I practised!!! I actually have a soft spot for the one on the left too, even if I can see all the flaws. It looks like she was created with a lot of freedom, even though I didn’t yet have the skill to know where to put the eyes or do the shading.

It’s so easy to get trapped in that thinking of not being able to acquire a skill (or attributing it to the magical ‘talent’, which makes it even more elusive and ‘not for us mere mortals’), especially once we leave full-time education. We’re formed, we’re done, can’t change now!

BUT WE CAN!!! We just need to want it enough!

And we need to put in the work. Don’t let that put you off though, the work can be fun. You can make it fun. Remember how kids learn? By playing! Get out your art supplies and play. Talent schmalent. Fun and fulfillment is where it’s at, and that is achieved by enjoying the process.

In the video below I embrace playfulness in art and create a journal spread based around giving myself permission to create.

Let me know in the comments what you think of the relationship between talent and doing things well!

Am I an artist just by virtue of calling myself one? When I create art, does that automatically make me an artist? Can I even call what I create ‘art’? Why is this word ‘artist’ so important, and what power does it hold over me? These are questions that occupy my mind often and I think are important to pay some attention to in order for them not to become obstacles on my journey of creating art and being an artist. 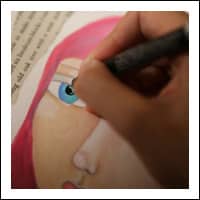 Has anyone ever given you a compliment on your art, only for you to quickly dismiss it or downplay it? For example I often find myself saying “Oh it’s only a hobby”. As if my art is not as arty as someone else’s, simply because it’s not my day job. If I accept that compliment, truly, it becomes a scary tentacle monster with lots of expectations. It becomes a gateway for judgement, because WHOA if I call myself an artist then I must tick the boxes of what other people think an artist is or should be.

I don’t know what other people think, but I know they’re out there, ready to judge, ready to trample my fragile budding artist soul. Better to not call myself an artist at all actually and crawl back in my cocoon of safety where I never risk anything or put myself OUT THERE. Isn’t it funny though, because I have no such problems with calling myself a mother. I became a mother automatically when I gave birth to my first son. I might be concerned sometimes with being a good mother, whatever the hell that means, but a mother I am, for sure, no question. So why is art so special that I feel creating it doesn’t automatically make me an artist? Whose permission am I waiting for to call myself an artist? 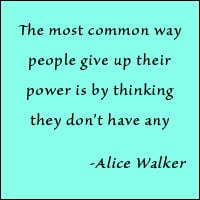 Have you ever noticed that people tend to treat you in accordance with how you present yourself? A confident person gets treated with respect. A shy person gets ignored. If you meet someone new and you ask what they do and they say “I’m an artist”, are you going to ask for their qualifications to make sure they’re really an artist? No, you’re going to accept it just as you would have if they’d said they’re a teacher or an architect or a mother.

If it doesn’t sound too cultish (lol), then please join me in saying that: From this day forward I will call myself an artist and not apologise for it.

We say things like: “Oh I can’t draw” or “I will never be good at painting” or “So and so is much better than me”. You didn’t wake up one day speaking your native language the way you do today. You learned over time. It was most likely an automatic process that you didn’t notice, but it took TIME and you were LEARNING. However, when it comes to anything creative, it’s as if we feel that the ‘talented’ are deserving of pursuing their art, but the ‘untalented’ are not.

A friend of mine in primary school loved drawing. She was ‘good at drawing’. I put that in inverted commas, not because she wasn’t, but because it’s a problematic label. She drew a lot and consequently was ‘better at drawing’ than many of the other kids. She got a lot of praise for being good at drawing and I compared my drawings to hers and felt disappointed and why should I bother as I wasn’t as ‘good’ as her.

As an adult she’s a rather accomplished artist now. I love her art. It is very rich and technically detailed. She didn’t wake up as a 28-year-old who could suddenly create amazing art. If she had stopped doing art as a little girl and picked up a pencil now, she wouldn’t be creating what she is right now. She’s had a lifetime of practice.

The above example shows how incredibly logical it is that you need practice to get better, and yet we tell ourselves we are not talented enough or not good enough as a reason not to do it!!

On the parenting forums/blogs I read there definitely seems to be a trend towards praising the effort rather than the result. It’s the approach I cognitively believe in and is how I’m raising my kids. And yet… that message from my childhood runs deep. It runs deep in my thinking, and I can see it runs deep in a lot of other people’s thinking as well. These wounds created in childhood are hard to heal!!

When I think back to my childhood I can think of a handful of things that happened that stopped the creative soul inside me in its tracks. My teacher laughing at a drawing I did. My mother telling me I needed more practice when I showed her a painting I’d done (not a horrible thing to say in itself, but that was the only comment). I think every child encounters these types of moments but the importance lies in how these moments are handled. How can a child be encouraged to move past these painful roadblocks? Hopefully not like me, with the decision that I shouldn’t bother drawing or painting.

I feel resentment because of these things that happened to me as a child. As a child you don’t have the life experience or emotional maturity to put things in perspective, ignore the haters or question the validity of a statement/opinion. Especially when the voices are those we trust (parents, teachers) to tell us ‘the truth’. I feel sadness for my child self and what I went through and the consequences that spill over into my adult life. It is very very hard to unlearn the patterns of thinking we learned as a child.

However, and this is the big turning point, as an adult I now do have the benefit of life experience and emotional maturity (ish *grin*) to start doing something about this. I can’t turn back the clock and undo the scars, but I can think to myself ‘Hey, those people so long ago, they don’t need to dictate my thinking in the present’. I can tell myself this every day, and believe me, I need to, in order to quieten those voices in my head that tell me I don’t deserve to do art because it’s not inherently ‘good enough’ or I’m not inherently ‘talented enough’.

I have the power to choose to do this and I empower myself by deciding to create art despite the emotional obstacles and negative voices in my head. Every time I decide to do something creative I am not just ‘getting better’ in a technical sense (i.e. by practicing), I am also growing as a person. I am recognising that I myself hold the power to start to heal my own wounds.